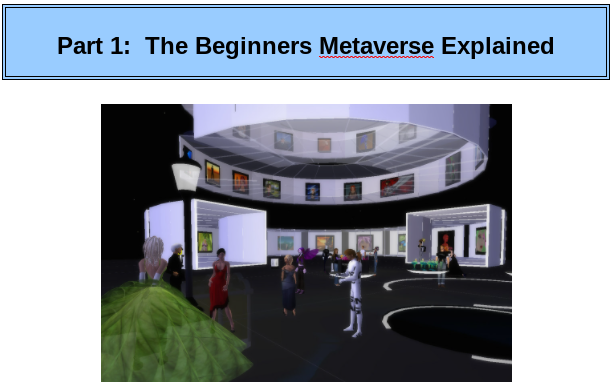 In late 2021, Facebook announced it was changing its name to Meta. Let’s revisit some history!
the “Metaverse” is NOT new… it’s been quietly evolving for some time. Back in 2016, a company called Niantic Inc released “Pokemon Go.” It’s a game that people can play on their phones – basically, the app overlays Pokemon on whatever the camera ‘sees’ … and the player has to ‘catch them’ with said app. Pokemon Go *virtually overlays* the images of a Pokemon in your *real life* (well, your real life as seen by the camera). 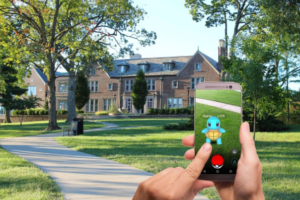 Almost like Virtual Reality, right? Except not.  What you see is called *Augmented Reality*.

At the time of this writing, Virtual Reality requires a headset. But *augmented reality* simply uses your phone and overlays images that would be considered desirable. And it’s not limited to gaming, either! 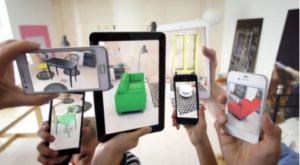 Companies are adding augmented reality to their products so people can visually “see” what a purchase might look like:

So why is Augmented Reality (AR) so important to understand if we’re focusing on the *Metaverse*?

Mainly because it’s one half of the Metaverse!

The other half is Virtual Reality.

Virtual Reality (VR) is experienced with a VR headset that entirely envelops your eyes:

Because your field of vision is contained within the headset, you can “see” and “interact” with experiences that are NOT *real life* (aka Virtual, aka Virtual Reality).

Again, *that’s* Virtual Reality. It’s all-encompassing. And Augmented Reality is seen by using apps on your smartphone that overlay images on whatever the camera “sees.” And the Metaverse? Well! Facebook describes the Metaverse as a set of virtual spaces where you can create and explore with other people who aren’t in the same physical space as you.

Think Pokemon overlays! Remember, overlays on your phone app are examples of Augmented Reality…
Headsets enable you to experience Virtual Reality…
And combining the 2 helps create the Metaverse…. 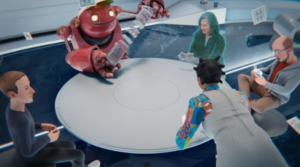 Reading about it can help only so much, however. Let’s get visual!

Let’s take a look at Mark Zuckerberg who owns Facebook (and Meta) and see what he looks like in his Metaverse vision:

But let’s take a look for a sec at this picture. You can see Mark at the left and 4 other contributors in the image, right?

What you’re seeing above is Mark having a team meeting with folk in the Metaverse.

It doesn’t *matter* where Mark is.
It doesn’t matter where his people are.
Somehow (in this case, I’d reckon via a VR headset) they can interact in virtual life… and make an impact in real life. 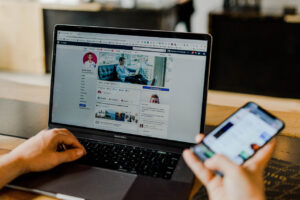 Why? Well, like it or not… the Internet (and the Internet experience) is always evolving. I mean, consider this stat:
“…In fact, mobile phones are the most popular device with which users access the internet – 50.2 percent of overall web traffic comes through mobile phones. That’s even more than laptops and computers (47.1 percent) and tablet devices (2.6 percent) combined….”

More than half of Internet traffic is via a mobile phone. That sure wasn’t the case a decade ago! And as Augmented Reality and Virtual Reality are continuing to evolve, it only makes sense that more and more people will use it…Which means the Metaverse will simply grow and grow, with or without you. The Metaverse is always evolving, and opportunities abound! 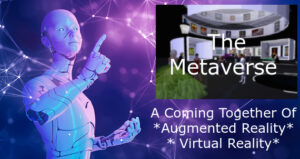 Mark Zuckerberg is betting billions on it, and working on it, and so are others. When he was building what became Facebook, nobody was impressed at first. He’s not alone in believing in the fact that the Metaverse will be the newer, better Internet. Some people have their heads in the sand about it, some have theirs in the clouds. Reality is somewhere in between.

Web 3.0 & Metaverse is here. Are your videos Metaverse-ready?…

360° 3D-Spin Videos are the future of marketing. See More Here

With the shift to web3.0, video marketers need to start looking at creating new style of videos that work in metaverse and stand out from everyone else. Create 3D-Spin videos of people, products and even buildings and more.

Facebook is so enraptured that the social media giant intends to spend $10 billion to become a metaverse company in the next five years. This shows that… There’s no doubt that being part of the metaverse will become brands’ calling cards similar to how social media profiles and websites work today. See More Here