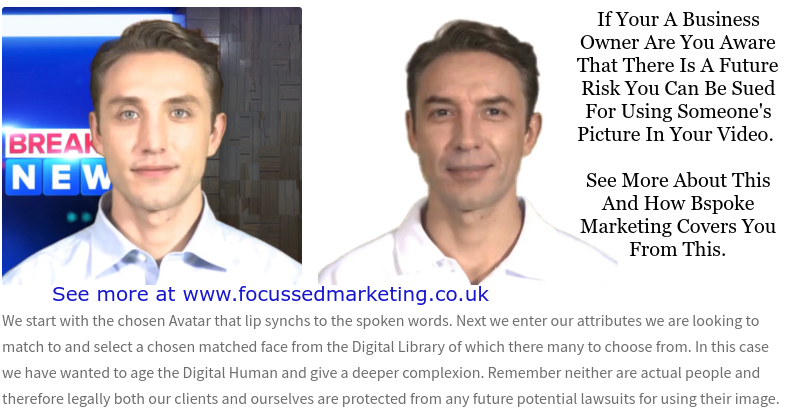 There is a very real risk of of lawyers suing companies for using real people images in their video recording without their approval. Or as, has been reported, stating that the use they agreed was not to allow the business owner to sell online their products without an agreed contract of license rights.
As many business owners will testify they spend countless hours of blood, sweat and tears as well as funding marketing campaigns to grow their business. Imagine if you ran a successful campaign and then in future years you received a legal challenge you would have to show you had contracted the individual and explained how their face would be used in the advertising posts.
Because to run a successful campaign you need a campaign video to promote it is easy for third parties to track videos using faces and like ADA in the USA. People who have been identified using facial identification matching tools can be contacted and induced to take out a claim that their personal rights have been violated.
In the same way that they do with visually impaired or disable people having access to online websites.
In the UK we have not gone that far yet but check out ADA and WCAG ruling and you can be sure we are not far behind the USA.
Having been approached several years ago for using a clients image supplied to us a year earlier we know the lengths these third parties will go to.
Here is Our Story:
Initially we were placed to build a mobile app working with a Council to promote their High Street and Town Centre as part of  a BID (Business Improvement District), as part of this we built a small data base of takeaway and food eateries as a PWA app. We were waiting further instructions and the project took a different  direction and we ended up with a printed giveaway and stand alone website, so the PWA app was put on a back burner and archived. It never even went public.
A year later we received notice that we had an image on the website that was covered by copyright by an individual. This individual was covered by a photo group who owned the copyright and this had then been licensed to this third party. The notice claimed they were acting for this individual who had acquired the licenses from this photo group and were trawling the websites for any of the group images. We were initially told a £1000 penalty was imposed but if we paid within 7 days this would be reduced to £600 or we would be taken through the courts and would be required to pay thousands.
Initially we thought this was a joke or scam but on checking this out we found that it was a big thing in USA and in Canada and a certain individual had acquired the rights. We were able to track the company to an address in West Sussex which turned out to be  a registered office for mail.  Spoke to a receptionist come Guard Dog, who was not helpful at all.  It was only when we received a solicitor letter from a large Scottish legal company that we started to get anywhere.  Explaining to them that it was not our image and we had been given it to use by a trusted client. Apparently this held little sway and we were still liable.
It was only when position was put to them that we would counter this in court and was backed by an official Government Authority ( as it was their photo we were using) that they backed down and the fact that this legal company was behind this supporting these practises and we would go public, that we were  given the individual contact details. On contacting this individual who was based in Israel who was mighty surprised we tracked him down, we countered with our own legal demand to see him in a UK Court or would apply for an extradition proceedings advised by our own solicitor at the time. After consideration this individual agreed to drop his case against our company with a parting shot telling us to be more aware.
That experience showed us what could happen to the unwary and now we are more aware of this and the potential for this to follow the same path in videos, with so many freely available. For individuals it is not so much an issue although they still need to be aware, but for a business it has dire consequences as outlined above. Hence we were delighted to be able to get a commercial license to be able to offer our clients the security needed with Digital Human AI Videos.

Why Your Business Needs Digital Humans

How Do AI Videos Work

How Do We Create AI Videos