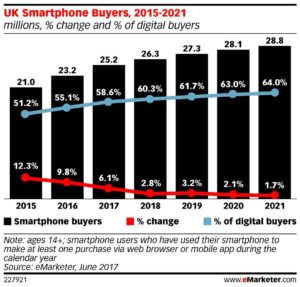 Using smartphones to shop for and buy goods and services has become commonplace in the UK. According to eMarketer’s latest UK retail ecommerce forecast, 58.6 per cent of the country’s digital buyers ages 14 and older—25.17 million people—will make ecommerce purchases (excluding travel and event tickets) via smartphone this year.

In 2017, UK retail ecommerce sales made via smartphones will be worth £16.42 billion, eMarketer predicts, and account for 46.5 per cent of overall retail mcommerce sales, which in addition to smartphones includes purchases made using tablets.

This year’s smartphone commerce tally will be up 45.7 per cent from a strong 2016, when sales grew by 66.0 per cent, an expansion more than triple the 18.0 per cent growth seen for UK retail ecommerce overall last year. 2017’s gain will continue that trend, outpacing an anticipated 14.5 per cent increase in overall retail ecommerce.

In total, the UK retail ecommerce market is set to exceed £81.55 billion in 2017, of which £35.31 billion will come from mobile commerce. eMarketer expects this year’s 28.4 per cent jump in retail mcommerce will be followed by additional, albeit lessening, double-digit gains over the next four years as UK consumers become more at ease spending via handheld devices. By 2021, eMarketer predicts that retail mcommerce in the UK will be worth £58.50 billion and account for 51.7 per cent of the country’s retail ecommerce sales.

“UK consumers are becoming ever-more comfortable using their mobile devices, and particularly smartphones, for retail purchases,” said eMarketer senior analyst Bill Fisher. “The slowly rising use of mobile payment options is adding a bit more fuel to the fire. The more comfortable people become using their smartphones for payment in a retail environment, the more likely they are to use them for retail shopping and buying more generally.”